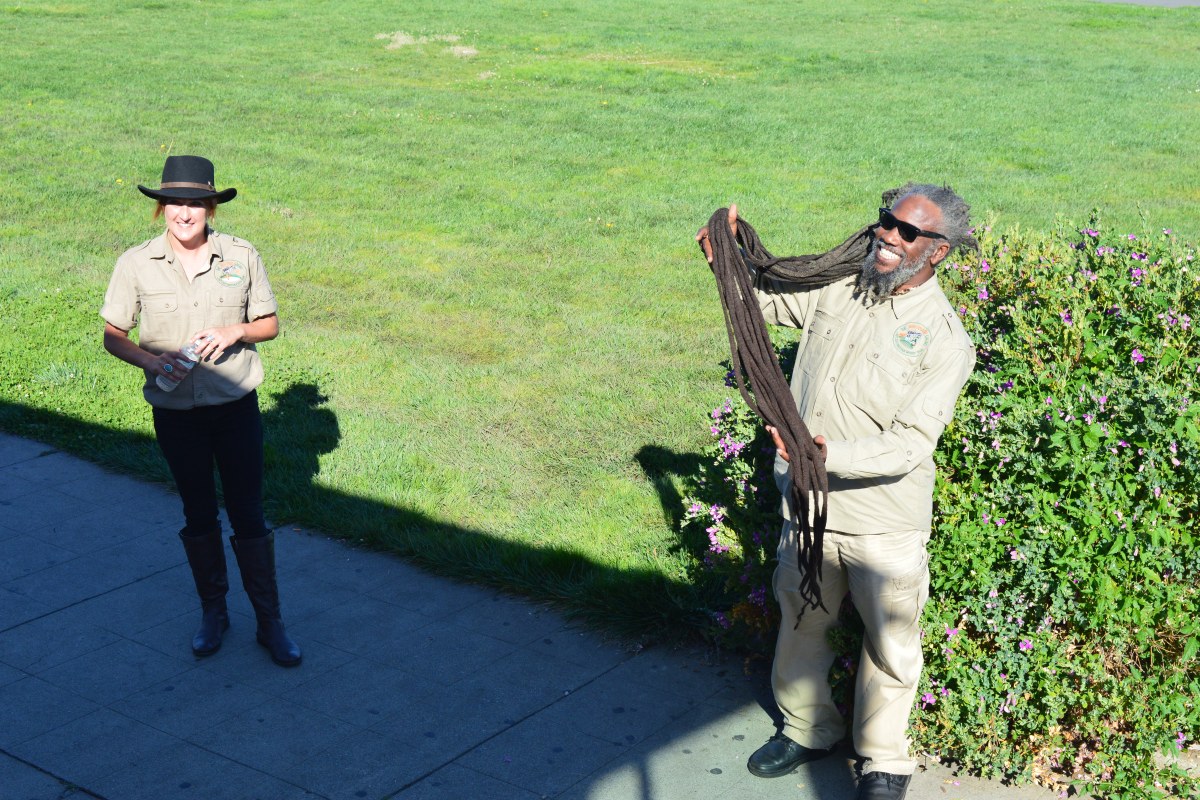 Travelling in foreign cities usually necessitates at least some sort of involvement with tour companies, be it for a day, week or month. In a city like San Francisco, where the main industry is tourism, you will be presented with an insane number of options for tours.

Some are good, some great, and one terrible, but there is one that is miles ahead of the pack. And that company is Urban Safari San Francisco . How many times in your life do you get to ride around a foreign city in a 30 foot zebra, adorned with vines and bananas?

I am not even joking, despite the photos, you’ll still have to see it to really believe it.

Urban Safari just had win after win in my book, picking us up exactly at the time they said they would, in the promised giant zebra bus. Which, for some reason, I suspected may have been an exaggeration when they said it, but it really is a safari bus, in the middle of San Francisco.

Our tour guide Naomi bounded off the bus to meet us, greeting the group and each person individually, before handing us our safari hats and introducing our driver. Our driver was 54-year old Jamaica national, Ombami (almost definitely not how his name is spelt, but how it’s pronounced). His greatest claim to fame was his hair, dreadlocked and neatly piled on top of his head for most of the journey, until he unravelled it to show us that he wasn’t grey when he was 24; which was the last time he cut his hair.  (He claims the greys increase in the year he got married, and again when his kids were born)

These two really made our tour incredible; it takes a certain type of person to have literally no hesitation to stroll around San Fran in a safari hat with a giant zebra bus, and Naomi and Ombami are definitely those people. Importantly though, Naomi knew a LOT about San Fran, and it is always impressive when a guide can comment on just about every building we go past, and answer every single question.

But really, I can’t even describe the tour with half the enthusiasm Naomi and Ombami have, so I’ll just leave it as saying that they’re the absolute best. Really, the tour could have been super boring and we still would have had a good time with this pair!

The first stop on the tour was actually a surprise stop of Ombami’s, and was the famous Ghirardelli chocolate shop; where he had organised a whole heap of free samples for the entire bus! This chocolate is seriously amazing, but that is a story for another time.

After enjoying the view of the harbour while we ate our chocolate, we moved on to our first scheduled stop: The Palace of Fine Arts. Not at all what we expected to see in San Francisco, we were greeted by the sight of Roman-style ruins, with gigantic pillars and the famous weeping women.

Naomi of course knew the entire history of the palace, from how it was first built out of paper-mache’ to how the women cry in empathy for lives lost long ago. It was really surprising, but beautiful to see, and most definitely worth a visit.

The next stop on our agenda was a typical San-Francisco experience, visiting Fort Point. We absorbed a spectacular view (arguably the best) of the Golden Gate Bridge, and explored the Fort itself; which, as Naomi informed us, has never actually been used for its intended purpose.

Maintaining our momentum, we had one last stop before stopping for lunch. Driving through Golden Gate Park, (which turns out is 20% bigger then NYCs famous Central Park) up to a mountain called the twin peaks. For an absolutely stunning view of the city of San Francisco.

These views, it must be pointed out, we got largely because we were very lucky with the weather, it was a beautiful day in San Francisco, and Karl the fog must have stayed in bed that day.

After our time here, it was 1pm, so most definitely time for lunch; and so we headed down into San Frans gaybourhood, the Castro district, to a little deli called Harvest, for an amazing lunch before the final part of our tour.

We explored the Castro, Tenderloin and Financial districts on the bus before sadly, our tour came to an end, dropping us off at the ferry terminal for the Alcatraz part of our adventure. Which was fantastic, but that is another story altogether.

This tour really was one of the best ones I have ever been on, it is such a cool experience, especially if you’re very over-excitable like myself. Both Naomi and Ombami were really amazing, and I feel like I now know more history and puns about San Francisco then I do about my own hometown! So if you are ever in San Fran and looking to find a day tour to explore the city, I would definitely recommend this one.